Heraldry is a socio-cultural phenomenon that originated in Western European feudal society, probably in conjunction with the East. It deals with the study of coats of arms – their origin, use, rules governing their composition, use and inheritance and merging. Heraldry is a system of coats of arms that are hereditary, painted on a shield, according to certain rules. Heraldry is the science that studies that system and its historical development. 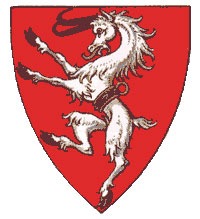 The coats of arms were first painted on a shield, and then they come out of the shield and are applied to other media, walls, textiles, stone plastic.

The coats of arms represent the holder and some of his rights: function, privilege, property, etc.

Heraldry is an interdisciplinary science that covers besides history, art, law, philosophy, etc. 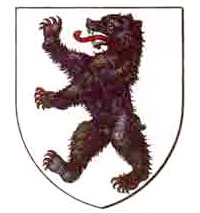 em of information-transmitting symbols, in addition to being a text in knightly tournaments, heraldry also forms a metatext of relations: Freedom (with the right to bear arms), property (and its inheritance). Only free subjects of law have the right to a coat of arms, and the mechanism for giving and receiving a coat of arms is within the competence of the higher heraldic authorities. That is why the coat of arms is a legal institution and an important sign of identification. That is why the study of artistic symbols puts heraldry in a special place in science and art.

Heraldry deals with a system of hereditary symbols, a system created in Europe in the 12th century. Heraldry had its ups and downs, it was raised and it was denied. For some it is a timeless language of symbols, for others it has been declared dead for many centuries. For some it was a secret passed from generation to generation, for others, who do not know it, only interesting pictures.

The essence of heraldry lies in the symbols. People have always used symbols, identified with them, decorated their homes with them, their clothes and various objects. Symbols quickly find their place on both weapons and military equipment. On ancient vases we see many warriors with shields on which symbols are painted. People identify with the magical properties of symbols. The use of symbols is ambiguous, people identify with the symbol, but the symbol is also identified with its bearer.

Heraldika is born with the development of culture and relations in feudal society in Europe. The conquered villagers, who in addition to the economic obligation to their landowners, also had a so-called military obligation. They, if necessary, accompanied their masters in various military endeavors, defensive and warlike. Literacy was reserved for the clergy, and visual symbols were used in ordinary communication.

Social relations in feudal society led to the birth of a new layer of the younger sons of the feudal lords. The property was indivisible and was inherited by the eldest son, while the others, apart from some financial support, did not have many other property rights. One of them was educated as a priest, while the other, most of them, sought their share in society. A new class is born – knights.

The second moment, which contributed to the birth of heraldry, is the development of military equipment and technique of warfare. The perimeter grew larger and covered more of the human body. The natural identification of warriors through the face was impossible. Personal identification required external visual symbols, such as a shield.

Military tactics at the time consisted of fighting smaller units on the battlefield, most commonly feudal lords. Thus, on the battlefield, there was a need to identify the individual units, both on their side and on the enemy. Therefore, clear symbols that are unambiguous and not repetitive were needed.

The third moment, which played a major role in the development of heraldry, was the Crusades. With the call of Pope Urban II from the Clermont Congregation in 1095, many knights accepted this call as more than just protecting the tomb of Jesus. Since they did not have a real place at home, due to the inability to inherit property, this seems lo as a good move.

Many of the rehabilitated villagers considered going to the Holy Land as a good replacement for their daily hard life and volunteered.

And as the name suggests, the cross was by far the most common symbol and identifying and commanding the units became very difficult. Thus, the need arose to define a system of organization of symbols. A charter from January 13, 1188 has been preserved. from Gissor, where the kings of France and England, Philip II and Henry II, as well as Count Philip of Flanders, agreed to identify different nations through crosses of different colors and backgrounds.13 This precedes the flags of several European countries ( England, Scotland, Denmark, Norway).

Those returning from the Crusades returned with new symbols from the East, which would forever enrich European “symbolism”.

The fourth moment, which is probably most responsible for the development of heraldry, are the knightly tournaments. The occurrence of the tournaments is connected with the meeting of Ludwig the German and his brother Karl in 844. when the suites of the two kings in Strasbourg held a war-like contest. Godfrey de Preouli, of France, was the first to compile the rules of the tournament14 in the mid-11th century. These were fun events in which knights competed the most, and they also served to entertain the masses, who were the audience.

The tournaments were held at fairs and were multi-day events in which knights of proven noble origin competed in several disciplines. The Heralds had the main task and the main role in these tournaments.