Anthem of the Republic of Macedonia 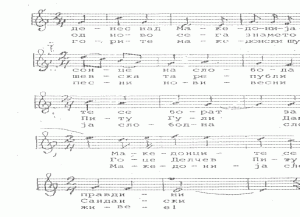 “Today over Macedonia is born” for the first time was performed at the reception of the new 1942 in Struga, by Vlado Malevski, author of the text, and musician Stefan Opetceski in front of 28 members of the National Liberation War at a secret meeting.

Initially, the melody was adapted from the folk song “Nadezhda fell sick”, which in turn was created as an adaptation of a melody that originates from an European hit, which in this area was brought by soldiers from the Thessaloniki front during WWI. Vlado Maleski learned this song from his mother. According to the memories of the musician Stefan Opetceski, the melody was inspired by several other songs.

The song quickly gained popularity and the next day it was performed after the play “Macedonian Bloody Wedding” in the birthplace of Vojdan Chernodrinski, illage Selci. It then spread among the partisans. In June 1943, it found its place in the first partisan collection “Macedonian National Liberation Songs”, in which the first place as an anthem was “Dawn of Freedom”.

The composer Todor Skalovski made an arrangement of the melody, which is “known as lyrical, loving. According to its melodic structure, it belongs to the melodies in the leader-taffel style, which can be found more often in alpine folklore. It is also known as a variant with a slang sound. Skalovski gave it a different rhythm and so its “chord structure of the melodic structure, the harmonious functionality and the way of formation is typical for the European revolutionary song”.

In September 1944, Skalovski formed a partisan choir on the free territory in Gorno Vranovci, which at a rally in Fojnica or Caska, Veles, for the first time performed “Today over Macedonia is born”, in front of the people, under the baton of Vlastimir Nikolovski.

By the spring of 1945 the song became generally accepted and was sung by almost every choir in Macedonia. Later, others worked on the processing and arrangement of the melody, such as Dragan Bojaldziev – Bato and Tomislav Zografski, an arrangement that was prepared for the 25th jubilee of the First Session of ASNOM in 1969. That is the version that is sung today, at the session of the Assembly of SRM on the proclamation of the amendments to the Constitution.

The text itself has undergone several minor changes. The original text was:
“Today a new sun of freedom is born over Macedonia,
Macedonians are fighting for their justice!
Do not grieve, Macedonia, dear mother, raise your head proudly, tall, old, young, male and female, rise to the fight!
The flag of the Krushevo Republic, Delchev, Gruev and Pitu Guli is flying again.
Sandanski, Dimitri Vlahov!
The Macedonian mountains are loudly singing war songs, new newspapers:
“Macedonia free, free to live!”

According to the author, the original text of the third stanza read:
“The famous masons of the Krushevo Republic Goce Delchev, Pitu Guli, Damjan Gruev, Sandanski became from the grave.”
In the collection, the verse “The famous masons became from the grave” was replaced with “The flag is flying again (now)”, and the list of revolutionaries was originally: “Goce Delchev, Pitu Guli, Karev, Vlahov, Sandanski”.

Another example is the event of Spasovden in the village of Dradnja, where “the choir sang the song ‘Today a new sun of freedom is born over Macedonia’.” The old men clenched their jaws, but still could not help but roll a tear through their cheeks. “They approached the flag, kissed it and hugged it.”

The text of the anthem underwent changes, especially in the part where the Ilinden people were mentioned. In some versions there is the name of Nikola Karev. There are suspicions that his ejection from the anthem has a political background.

Finally, with the constitutional amendments of April 14, 1989, with the amendment XXIV, Article 10 of the Constitution of the SRM is replaced with the text: “Anthem of the Socialist Republic of Macedonia is ‘Today over Macedonia’.” Which gives it an official position.

The Committee on Constitutional Issues from the received solutions gave three proposals as possible solutions for the anthem of the Republic of Macedonia: “Anthem” by Taki Hrisik; , “Today over Macedonia” in music by Todor Skalovski; and “Be eternal” by Aleksandar Dzambazov.
At the session held on August 11, 1992, there was only one amendment to the Law on the Anthem by the MP Kiril Kovacevski, which required the third stanza to read:
The flag is flying over the Krushevo Republic again,
Goce Delchev, Pitu Guli, Karev, Gruev, Sandanski.
Which will correct injustice and the first president of the Krushevo Republic will be mentioned forever in this anthem.
But the Constitutional Commission did not support the amendment, “because the song that is sung is an author’s work whose last text was received and accepted by everyone during his lifetime, when the author was alive.”

At the voting, the MPs unanimously voted for the previous anthem “Today over Macedonia” with 88 votes in favor. The session was not attended by MPs from the PDP-NDP coalition of political parties by ethnic Albanian.

Traditionally, the anthem is performed by a choir at public events, or an instrumental version is played. Influenced by the American culture at sports events, the anthem should be sung by a soloist, and in Macedonia this performance of the anthem is gaining momentum.

The First Anthem of a Democratic Federal Macedonia

The anthem as a national and state symbol is associated with official use, as holding state-building events. The first state-building event at which the anthem was performed is the First Session of ASNOM held on August 2, 1944 in the monastery of St. Prohor Pchinski. The solemn session opened with the anthem “Dawn of Freedom”, while the working part with the anthem “Hey Slavs”. With this, de facto two anthems were established in the Democratic Federal Macedonia, one of the Yugoslav federation, and the other of Macedonia.

At the first session of ASNOM, held on Ilinden, August 2, 1944, in the monastery of St. Prohor Pchinski “… in the hall the anthem resounds loudly: ‘Dawn of freedom …'” 5 The text of the anthem edited by Kocho Racin was published several months earlier on the free territory of Lopushnik, in the partisan printing house “Goce Delchev”.

Dawn of freedom dawns
dawn of eternal struggle!
Rise in souls and hearts
to all slaves in the world!

Tyrans, we will do a miracle
and your yoke we do not tolerate!
We will shed heroic blood
and get rid of it again!

Nothing scares us anymore,
we started the fight bravely,
after the holy, native mountains of ours
free we will die!

Chorus …
Dawn of freedom,
dawn of eternal struggle!
Rise in souls and hearts
to all slaves in the world!

The anthem “Dawn of Freedom” is actually a re-sung version of the “March of the Macedonian Revolutionaries” which was written in 1918. The authorship of the text and the melody is attributed to the composer Aleksandar Vasilev Morfov (1880-1934), born in Plovdiv.

The march was well-known among Macedonian emigrants to Bulgaria. In the thirties of the last century, VMRO declared it a “Macedonian March” with the function of a Macedonian anthem. The march was sung in Macedonia in the period between the two world wars.