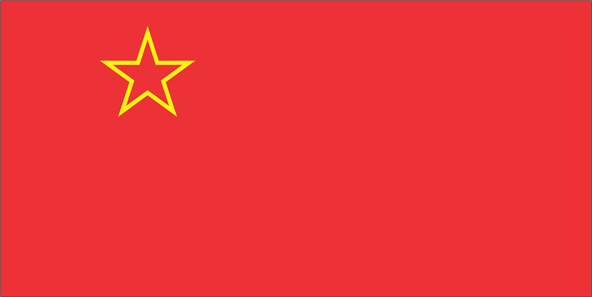 The basis of the design of the Macedonian flag emerged from the Conference of the General Headquarters of the National Liberation Partisan Units of Yugoslavia in Stolice in 1941. This laid the foundations of the partisan units of Yugoslavia, creating the basis for the future state union with Macedonia as a constituent part. Partisan units were defined as combat units of the peoples of Yugoslavia, and an advisory order defined the red five-pointed star, together with the national flag, as their distinguishing mark. This order used the general concept of military designation—a national flag plus a red five-pointed star that would become part of the new concept of national flags of the federal republics in the Federation. In this order, Macedonia and its flag were not mentioned, but this concept was later reflected during the design of the Macedonian flag.

In the summer of 1942, the design of the Macedonian flag was discussed for the first time at the meeting of the General Staff of the Peoples’ Liberation Partisan Units of Macedonia (PUM), when the commander, Mihajlo Apostolski, was preparing to go into battle leading the partisan units.  He said: “Partisan units should fly a flag. And what will be the flag?” After analyzing the flags of the Ilinden Uprising of 1903, a red flag was chosen.

At the partisan base at the main headquarters of PUM (Partisan Units in Macedonia) in Lopušnik, Kičevo, in accordance with the provisions for partisan flags in the advisory order in Stolice, the Macedonian flag bore a red five-pointed star in the center, bordered in yellow-gold. This design, inscribed with names of military units, became a template for military flags.  However, sometimes the star was in the canton, as seen a photograph from Kičevo in March 1943.

The flag of the People’s Republic of Macedonia was established in Article 4 of its first constitution of 31 December 1946.

When it is divided into four squares, the center of the star coincides with the circumference of the diagonals in top mast part of the flag. The upper arm of the star is a directed upward while lower arms downward. The star’s radius is equal to one-sixth of the flag’s height.