74 Years of the flag of SR Macedonia 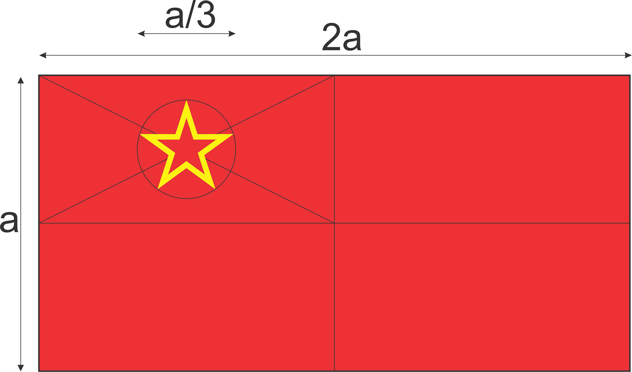 The flag of the People’s Republic of Macedonia for the first time officially was established in Article 4 of its first Constitution of 31 December 1946.[1]  It is red in proportions of 1:2.  On it is a red five-pointed star in the canton, distinguished from the field by a yellow fimbriation.  According to the 1974 law, the diameter of implied circle enclosing the star is 0.33 of the height of the flag, smaller than on the tricolor of the Yugoslavia, and of the republics of Serbia, Croatia, Montenegro, and Slovenia, where it is 0.6 of the height of the flag.

The basis of the design of the Macedonian flag emerged from the Conference of the General Headquarters of the National Liberation Partisan Units of Yugoslavia in Stolice in 1941. This laid the foundations of the partisan units of Yugoslavia, creating the basis for the future state union with Macedonia as a constituent part.[2]  Partisan units were defined as combat units of the peoples of Yugoslavia, and an advisory order defined the red five-pointed star, together with the national flag, as their distinguishing mark.  This order used the general concept of military designation—a national flag plus a red five-pointed star that would become part of the new concept of national flags of the federal republics in the Federation.  In this order, Macedonia and its flag were not mentioned, but this concept was later reflected during the design of the Macedonian flag.[3]

In the summer of 1942, the design of the Macedonian flag was discussed for the first time at the meeting of the General Staff of the Peoples’ Liberation Partisan Units of Macedonia (PUM), when the commander, Mihajlo Apostolski, was preparing to go into battle leading the partisan units.  He said: “Partisan units should fly a flag. And what will be the flag?” After analyzing the flags of the Ilinden Uprising of 1903, a red flag was chosen.[4]

The first Ilinden Uprising flag is red proper, with no additional symbols, could be considered a flag of the uprising as distinct from that of the MRO organization:  “… above the town of Kruševo was the red flag proper instead of that black-and-white flag with a skull and crossed bones, which was a symbol of the uprising.”[5]

In accordance with the provisions for partisan flags in the advisory order in Stolice, the Macedonian flag bore a red five-pointed star in the center, bordered in yellow-gold.[6]  At the partisan base at the main headquarters of PUM (Partisan Units in Macedonia) in Lopušnik, Kičevo, the appearance of the Macedonian flag was similarly determined—a red field with the same red five-pointed star, but with yellow edges.[7]  This design, inscribed with names of military units, became a template for military flags.  However, sometimes the star was in the canton, as seen a photograph from Kičevo in March 1943.

Jonovski Jovan (2020) The Sun and the Lion as Symbols of the Republic of Macedonia, Danver: Flag Heritage Foundation, 29-30.