Republic of Macedonia declared independence in 1991, but was admitted on 8 April 1993, and its flag wasn’t allowed in the member flag display in front of the U.N. building in New York. It was the first time in the U.N.’s history that a new member was admitted, but not its flag.

This only ended with an Interim Accord between Macedonia and Greece in which Macedonia agreed to change its flag and committed to discourage the public use of its former flag.[1]

Proposals for the design of a new flag of the Republic of Macedonia were undertaken by Prof. Miroslav Grchev, an architect. The new flag had to be distinct but retain a thematic, visual-symbolic, and identity continuity with state and national flags, with the sun (and the five-pointed star, the sun is a star), and with the colors yellow and red. The basic vexillographic forms of the sun were considered, and for obvious reasons the Kutlesh-type sun was discarded (Fig. 1). 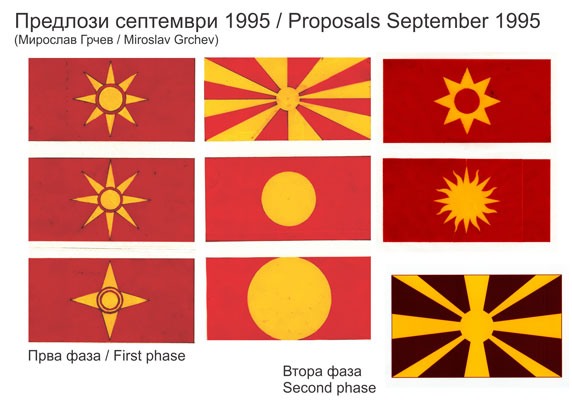 After exploring 12 versions of the sun, the concept materialized as a sun with eight divergent rays that emerge directly from the disk, without additional elements (Fig. 2).[2]

However, the final proposal was amended by Prof. Kostadin Tanchev Dinkata, a fine artist. The original “golden” ratio proportions[3] were changed to 1:2 and the rays were detached from the solar disk by an implied circle. This broke the balanced composition of the circular symmetry of the sun and radial rays that was also symmetrical in a square format.

Dinkata claimed he made the proposal himself, without any connection to Grchev.[4] In another claim, journalist Spase Shuplinovski asserted that the sun on the flag is his idea and it was backed by U.N. General Secretary Boutros Boutros Ghali, who forced the president of Macedonia, Kiro Gligorov, to accept it. According to Shuplinovski, Prof. Grchev only did the “computer graphic” work.[5]

Looking at the final design, it is difficult to believe that the original work of Grchev did not underlie the final design by Dinkata. Therefore, the flag should be referred as the Grchev-Dinkata design. Spase Shuplinovski did not work on the design of the flag at all, and in no way can he be considered the flag’s creator in his ideological or other kind of creator.[6]

The Liberal Party came up with a proposal for an 8-rayed sun with the same wirth rays, like those on the British Union Jack (Fig. 3). 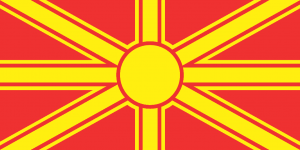 On 22 September 1995, two proposals for the new flag were published. Consensus was reached on the Grchev-Dinkata proposal with the sun with divergent rays. The proposal was accepted by 86 MPs.[7]

The Flag Institute sent an amended proposal by Paul Wason to the Macedonian Embassy in London. The proposal “used the Byzantine eagle, the red and black colors of VMRO and three stars to represent the countries where Macedonians live. The Greeks may not have liked this part” (Fig. 4). 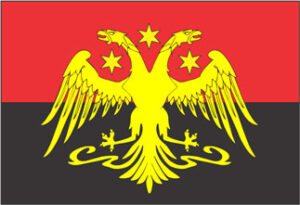 [8] The three stars also appear on a version of the flag used at the founding congress of VMRO-DPMNE in May 1990. They represented the three parts of Macedonia separated during the Balkan Wars of 1912–13: Vardar (Serbia), Aegean (Greece), and Pirin (Bulgaria)[9] and are considered a symbol of striving for unification (Fig. 5). 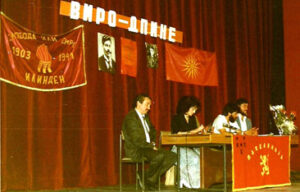 To prepare the public for the change of the flag, the day before announcing the new design of the sun, the main daily newspaper Nova Makedonija published a survey testing citizens’ willingness to change the flag. The title of the paper’s poll was quite indicative: “The name cannot be changed—the flag can!” Actually, the entire survey addressed more on the question of the country’s name and possible flag variants. 56% of the respondents did not mind changing the flag, 26% were opposed.[10] This supported the theory that the flag was sacrificed to preserve the country’s name.[11]

On 5 October 1995, the 27th session of the Assembly of the Republic of Macedonia adopted the law on the flag as well as a declaration condemning the assassination attempt on President Kiro Gligorov two days earlier. In an exceptionally short session, without debate (showing that all parliamentary groups had already agreed on changing the flag), the Law on the Flag of the Republic of Macedonia was adopted with 110 votes in favor, one against, and four abstentions.[12]

Article 2 of the Law states:

In addition, a graphic representation of the flag is provided (Fig. 6). 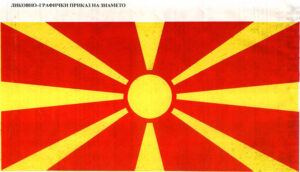 The new flag was first hoisted on 7 October at the Parliament Building of the Assembly in Skopje, and on 22 October in front of the United Nations headquarters in New York. The flag was welcomed with great resignation, as a symbol of capitulation. It was not hoisted in front of municipalities in Macedonia controlled by the opposition VMRO DPMNE until the next local elections.

The design of the flag is specific, with the red field and divergent sun. Although some of the dimensions of the sun’s design are specified in the Law, some are still undefined and some deviate from the graphic representation of the flag that is part of the Law. The rays of the graphic representation of the flag are not obtained by simply cutting the diagonals of the rectangle, as written in the law, but from a complex structure of the beginnings of the edges of the rays that form a square with a ratio of 3:4 (Fig. 7).

The flag has proportions of 1:2. The disk’s diameter is 1/7 of the length of the flag, i.e., its radius is 1/7 of the height; the entire yellow sun with rays is 33% of the flag’s area; the remaining 67% is red. The sun has two horizontal, two vertical, and four diagonal rays, each set with differing characteristics and different starting points; only the horizontal rays meet at the center of the flag. Their length is 1 unit (E) (height of the flag), their width is 0.2 E, and they subtend an angle of 11.53°.

The state flag is defined as a rectangle with sides 1: 2. But it is often necessary for the flag to have other dimensions. For example, the size of the flags of the participants of the Olympic Games has long been according to the proportions of the flag of the host country. Today the flags are in the proportion of the Olympic flag 2: 3. Or the flags of the countries on the diplomatic cars during the official visits are also with given dimensions.

Or, the flag is used as a part of many logos and graphics,or in document like ID or passports, where the dimensions are less than the prescribed 1:2, but they are actually cut from the original-ratio flag, which makes the flag part asymmetrical as if four more rays are missing to complete the set design symmetry (Fig. 8).

Since the definition of the flag in the Law states that the rays are horizontal, vertical, and diagonal, then the sun should be redrawn for uses in circle, square, and other dimensions (Fig. 9).

From a vexillographic point of view, the flag’s design attributes changed but the symbols represented did not. The flag remained red with a yellow sun. The sun with convergent rays replaced one with divergent rays, it did not lose its attributes or gain others.

The new flag started to be accepted very slowly. It can be seen today at sporting events, where it is more than half of the flags displayed.

Events that have helped this are being set up on flagpoles in many locations throughout Macedonia. In December 2008, masts 30m high were set up in Skopje on the city square, in front of the Parliament, on the Skopje Fortress and in Bitola. The flag has dimensions of 4m x 8m. In the next two years, many such masts and flags are erected. And the peak of the promotion of the celebrities is the establishment of the flag-changing ceremony accompanied by the intonation of the national anthem in front of the Parliament and the Government of the Republic of Macedonia, which are open to the public, as well as in Vodno – the President‘s palace for invi­ted groups  from different back­gro­unds from students to retirees (Fig. 10). The first ceremonial change of the known was performed in front of the Parliament of the Republic of Macedonia on Saturday, May 15, 2010, conceived to be called „Flag Day“. 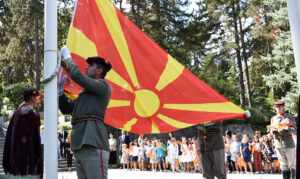 May 15 again become relevant on social networks – the day of the Macedonian flag when people are invited to post pictures with the Macedonian flag, without specifying which flag they mean, although in the diaspora it is often understood that it is the flag from 1992 (Fig. 11).

But the old flag was never abandoned and is still used by some people, and it has gained in popularity especially after the State had to denounce it under the 2018 Prespa Agreement between Greece and Macedonia—it can symbolize opposition to the change of the name of the Republic of Macedonia to “North Macedonia”. Under that agreement Macedonia was forced to remove any public appearance of the old Kutlesh/Vergina flag—the sun was even ground off of manholes covers. The old flag is seen by some as a national (ethnic) flag, while the new is seen as a state flag. 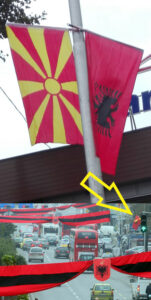 Most of the Macedonian Albanians, living near the border with Albania and Kosovo, never accepted either flag. They only fly the Albanian flag (red with a double-headed black eagle) and regard it as an ethnic flag. The use of this flag is accepted by the Law, which requires that it be flown only if accompanied with the Macedonian flag (which is 1/3 larger)[13], although this requirement is rarely honored. An example is the marking of the Albanian flag day on November 28, 2018, in the Municipality of Chair, in, Capital of Skopje mainly with Albanian state and national flags. Where put together, the flag of the Republic of Albania is  larger (Fig. 12).

[1] The Greek province of Macedonia (a name used only since 1987, previously called “North Greece” began using a blue flag with a gold or silver 16-rayed sun as a symbol of “Greek Macedonia”. Although this is not a problem heraldically, since the flags have different colors, the Greek government viewed the Republic of Macedonia’s use of this symbol as stealing one of its symbols.

[9] The little part under Albanian is not recognized in the deisgn.