We preserve and promote Macedonian heraldry

We look at Macedonian heraldry from several aspects, first we cover what was studied by Alexander Matkovski, and then something else, says Jovan Jonovski

Heraldry in Macedonia is being talked about more and more and is more and more present. Heraldry deals with the study of coats of arms, their origin, use, inheritance…
The main contribution to its popularity among the public is given by the Macedonian Heraldic Society. Since 2018, it has continued the traditions of the Macedonian Heraldry Association founded in 2003 and which dealt with heraldry, vexillology, phaleristics, chivalry and noble issues in Macedonia. Their president, Jovan Jonovski, together with his colleagues, are involving themselves into this significant discipline.
– Childish interest took a more serious form during my studies in Budapest and especially in London. In 2000, I also set up the website Heraldry in Macedonia, on which, first of all, there are the land coats of arms and texts from the book Coat of Arms of Macedonia by Aleksandar Matkovski. In the following years, other content on personal, family and municipal coats of arms, as well as sections on heraldry, was added to the site. Interested persons gather around the site and the association was formed in 2003, explains Jonovski.
MHS  now has a dozen highly educated members. Some are mostly interested in insignia on uniforms, others in emblems of sports clubs, etc. They also edit the magazine “Macedonian Herald” in which professional articles are published.
– We look at Macedonian heraldry from several aspects. It covers what Matkovski has studied and published in 1968-72. These include the coats of arms with a golden lion on a red shield and, inversely, a red lion on a golden shield from the Illyrian coats of arms and Stemmatographies. The second is the attributed coat of arms of Alexander the Great in medieval sources from Europe, where in addition to the coat of arms with a lion in both color combinations, there is also a coat of arms with a griffin, with a dragon, with three crowns or three bells… This includes the coats of arms of Macedonia … Furthermore, there are the state and municipal coats of arms, as well as personal coats of arms, states Jonovski.
MHS has numerous activities, it is connected to other neighboring heraldic associations, it is a member of world associations, it is responsible for the opening of the permanent display of heraldry in Macedonia, in the Museum of Macedonia, the establishment of the Macedonian local heraldic system, according to which several municipal coats of arms were designed, for publishing two books on heraldry, vexillology and other areas, on the coats of arms of the President of the Republic of Macedonia and the proposal for the coat of arms of Macedonia 2013, etc.

Any individual can have a coat of arms 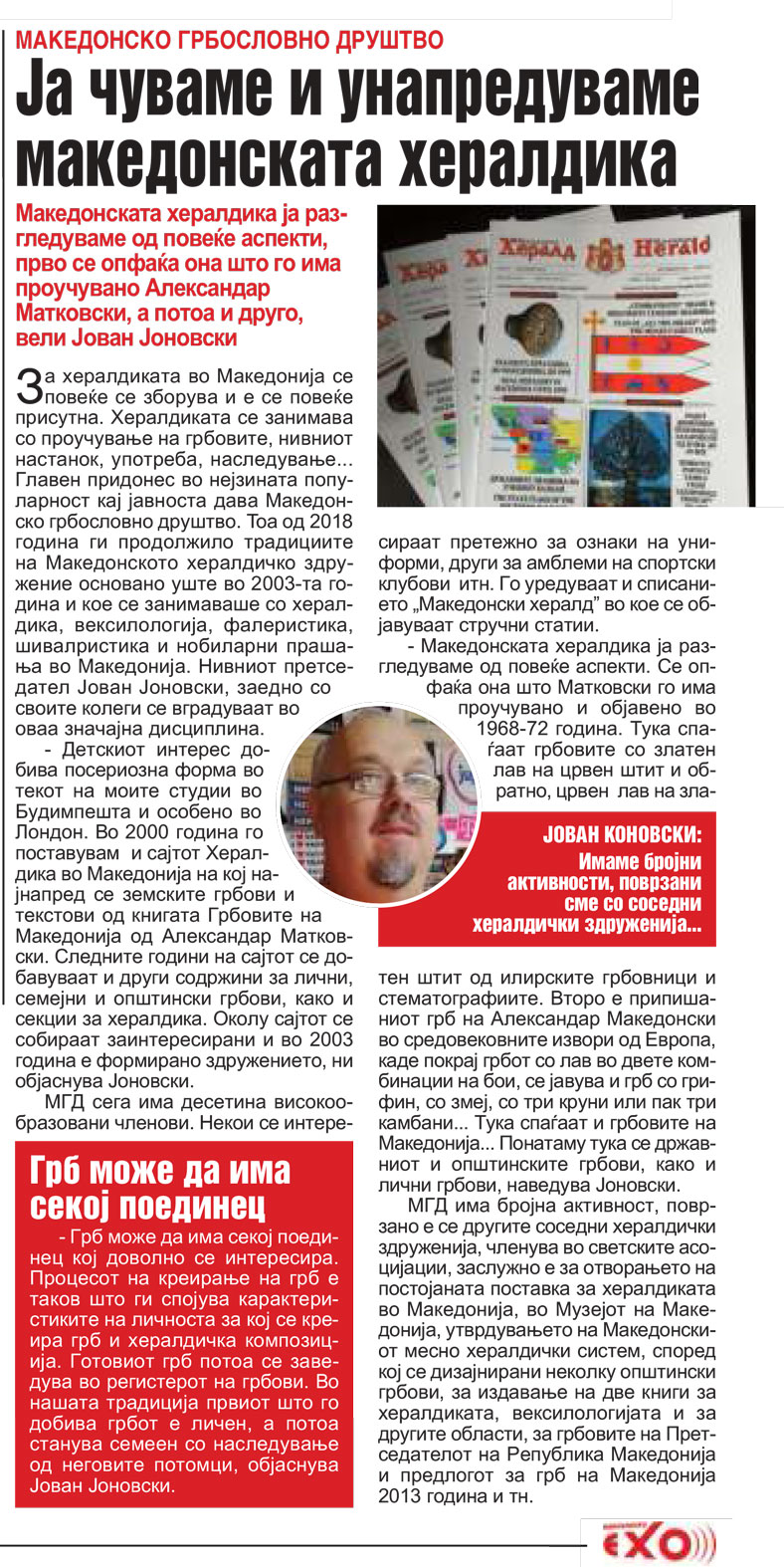