Macedonia loses for the second time the sun of Kutlesh 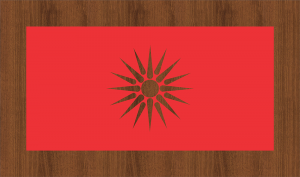 On the day of 5.10.1995, in accordance with Article 7, paragraph 2 of the Interim Accord, the sun from Kutlesh was removed from the flag of the Republic of Macedonia.

With the final agreement, Article 8.3 provides for the complete ban on the use of this symbol. Namely, it is prescribed to delete it even in its historical context, when it was still a national flag of the Republic of Macedonia from 11.8.1992 to 5.10.1995.

8.3. “The second party shall not re-use it in any way and in any form the symbol previously displayed on its former national flag. Within six months after the entry into force of this Agreement, the Second Party shall proceed to the removal of the symbol displayed on its former national flag from all public places and public use on its territory. Archaeological artifacts do not fall within the scope of this provision.