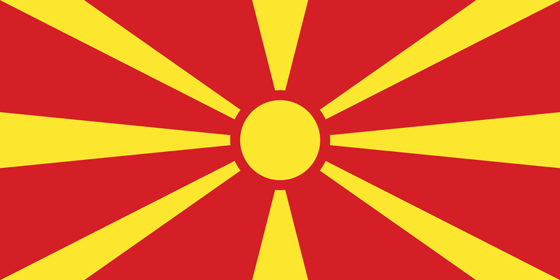 In the monograph, Kostadin Tanchev – Dinka, writes that he is the author of the flag. here is the excerpt from the book:

“After the dispute with Republic of Greece, on the 5 October 1995, The Assembly adopts a new Law on the Flag of the Republic of Macedonia, according to which the flag is “red with golden-yellow sun with eight sun rays extending from the solar disk to the edges of the flag, the sun’s rays intersecting diagonally, horizontally and vertically. The solar disk is one seventh of the length of the flag, the center of the sun coincides with the center at which the diagonals of the flag intersect, the ratio of the width and the length of the flag is 1: 2 “.

Before the new law was adopted, in the artist’s words, on September 19, 1995. he was summoned to the office of President Kiro Gligorov (state officials Stojan Andov, Zoran Krstevski and Stevo Crvenkovski were present). Their suggestion was that the flag shopuld contain a symbol of eight- ray  sun using red and yellow. According to this proposal, Kostadin Tancev-Dinka drafts the graphic design and delivers it to the Assembly for two days on 22.9.1995. The proposal appears in the newspaper and in the author’s words, its design is identical to the current flag (he was not paid royalties again). ”