Order of st. Clement of Ohrid 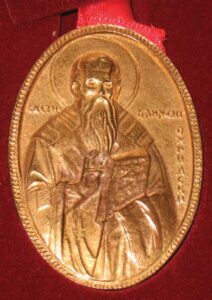 The Order of St. Clement of Ohrid is the only decoration of the Macedonian Orthodox Church – Ohrid Archbishopric (MOC-OA). The order is in 3 classes, named as first, second and third. The pennant of the Order is an elliptical medallion with the same dimensions in gold (1st row), silver (2nd row) and bronze (3rd row) color. The order is worn around the neck and all degrees are with a plain red ribbon. The pennant of the Order was made in Goldmak Radovish.

The order is prescribed in the Constitution of the MOC Article 24 item 36, which describes the activities of the Holy Synod, that it awards the order of St. Kliment Ohridski, without additional explanations. Although the statute provides for this order since 1967, it was first awarded in 2002 on the occasion of the grand opening of the restored church of St. Clement of Plaoshnik, Ohrid. The Grand Master of the Order, according to the hierarchy of the MOC-OA, is the Archbishop of Ohrid and Macedonia kyr kyr Stefan.