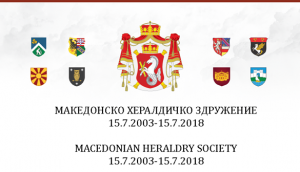 After 15 years of existence, the Macedonian Heraldry Society ceased. On its foundations and principles, the Macedonian Heraldic Society is formed, which continues the tradition and efforts of the former, especially taking care of the Register of Coat of Arms and its Gazette – Macedonian Herald. For that purpose, in order to raise the rating of the Macedonian Herald, an international editorial board was formed composed of renowned names in the field of heraldry, vexillology, phaleristics, genealogy, as well as art, history, anthropology, etc.